“I can only draw stick figures!” 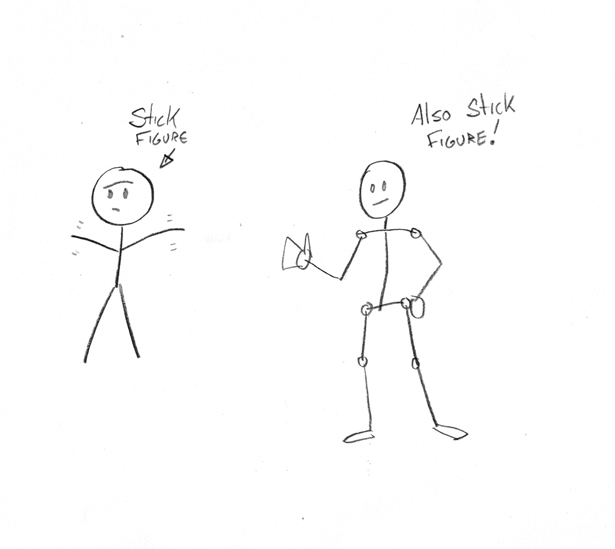 That’s GOOD. That means you are using your eyeballs and your brain both to see that the human body is made up of a vaguely circle-shaped thing on top, a shape that is a body, and a shape that is limbs. At its most basic, drawing is learning to see shapes, which is exactly where you need to start.

Drawing is a matter of learning to see (versus what you think you are seeing) and then translating it through your brain and onto the 2d form that is paper. This is not a thing that is taught in schools, even in most k-12 art classes.

If you find yourself in more advanced classes in school, your teacher will set up a still-life, which often consist of a shoe, an apple, an egg, paper bag, a plant, a light bulb, then make you start to learn to see the basic shapes of the objects, their volume and shadow. You will come to hate shoes, and have many drawings of them. We’ll get back to this because it is like medicine – it is good for you.

How does this apply to people?  The human form is made up of SHAPES. LOTS of SHAPES. The human figure is one of the most complex things you can start to draw on, and you know when it’s bad because we spend so much time staring at them. But you probably want to draw people because then you can do your characters or comics or whatever.

So lets start with stick figures.

The anatomy of a stick figure has a few extra ‘sticks’ than you are used to:

Clicking on the above link will take you to a DeviantArt page to use as reference, where you will find 20 figures like those above. Pull out a sheet of paper, and try to make stick figures of the human form. Go ahead and do them all. Don’t worry about clothes, the face, or even proportions too much. You’re just trying to envision where the sticks are for each body part. Don’t take too long, either. Just draw sticks.

As the model moves, you’re going to notice some weird things going on with the elbows and such where your sticks get real short. This is called foreshortening – it is a beast of a topic that we will discuss later when we get into other shapes.

Also try to notice that sometimes the line for the shoulders and hips tilt at angles. This is useful to watch. It will become important later!

Your drawings may look silly. But they’re just stick figures, so it’s all good.

(Eventually I may work out how to do videos, and post some pretty basic videos on particular lines.)